Parts of a Folded Motion Transducer 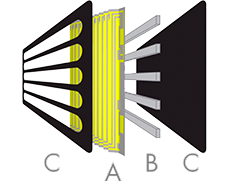 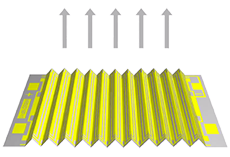 The Folded Motion Tweeter works by moving air (which creates sound) perpendicular to the folded ridges of the diaphragm, similar to how an accordion works. This extremely low mass diaphragm "squeezes" air and requires almost 90% less excursion than the typical 1-inch dome tweeter, which drastically minimizes distortion while providing a lightning fast response time. The increased surface area also provides a wide, yet controlled sound dispersion to create a realistic and carefully etched sound stage.

Although our Folded Motion technology enables speakers to operate to lower frequencies, they cannot reproduce deep bass as effectively as a conventional speaker of similar size. Our solution is to reproduce the lowest frequencies with a very high-quality dynamic woofer. Other companies who have made such hybrids have often exhibited something of a Napoleon complex, overemphasizing the output from the woofer in an apparent effort to prove their loudspeaker manhood. The result of that misguided strategy is invariably thick, turgid bass that obscures midrange detail, thereby obliterating one of the main reasons for building a thin-film speaker to begin with. We don't do that. Instead, our speakers incorporate extremely high-performance woofers, crossed over the Folded Motion transducers via carefully tailored, precisely calculated networks made with top-quality components. Low crossover frequencies, phase- and amplitude-optimized crossovers, and critically damped woofers ensure a seamless transition between the two types of drivers, yielding speakers that really do offer the best of both worlds.

Uncompromising performance. Unflinching accuracy. Unwavering reliability. Harnessing the myriad technical advantages of electrostatic principles to recreate sound in its truest form—this is what MartinLogan is all about.