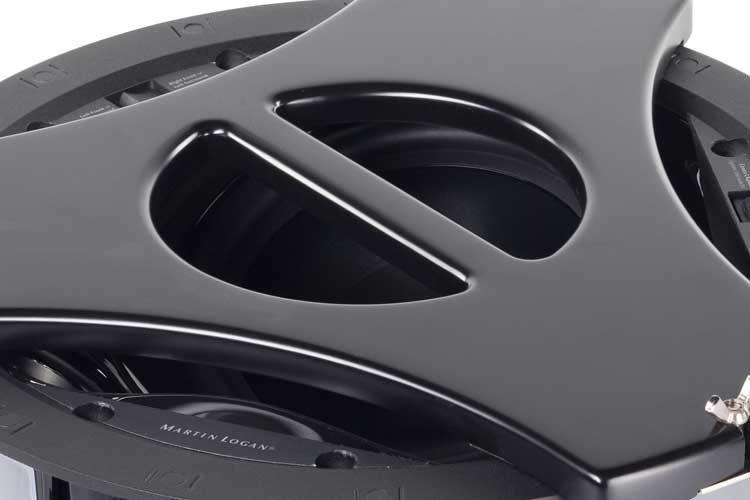 Stealthy appearance, MartinLogan performance. An in-ceiling speaker that sounds like it isn't.

The world's most sophisticated and elegant architectural loudspeaker, Vanquish sounds so clean and dynamic, you'd think it were a superb standalone design. Not surprising, since it borrows so much from our own, including Folded Motion XT drivers and aluminum cone, high-resolution woofers. A rigid aluminum chassis and die-cast mounting locks enhance performance and ease installation, while an rotatable tweeter and bezel-less magnetic grille provide incredible adaptability into any installation.

The Pinnacle of Discreet High-Performance Audio

Introducing three of the most ambitious architectural speakers ever created; Axis, Edge & Vanquish, all part of the Stealth Architectural Series. Each speaker utilizes our larger, low distortion Folded Motion® XT tweeter, along with black-aluminum, high-excursion bass and mid-range drivers, an advanced topology crossover network with polypropylene and low-DF electrolytic capacitors, custom wound inductors, and thermal and current protection. Premium wire connections, a gloss piano-black speaker baffle that hides all mounting hardware, solid one-piece cast aluminum chassis and bezel-less magnetic grille put the Stealth Series in a class of its own.

The low distortion Folded Motion XT tweeter boasts a radiating surface 40% larger than those found in the award-winning Motion® Series products. This substantial leap in size increases the bandwidth and efficiency of the high-performance tweeter for effortless performance.

Stealth Series speakers are designed to disappear visually into the room, and each one has a completely bezel-less, low-profile, paintable grille for the ultimate stealth installation. Our in-house design and engineering team also minimized the grille's perforated metal holes to create a more discreet look, without compromising the quality of sound. A magnetic system secures grilles easily into place, reducing the risk of warping or damage during installation.

We've also refined the look underneath the grille for those who want to show off their high-performance in-wall or in-ceiling speakers. The driver complements are held securely in place by a flush mounted 3/4-inch solid, high-gloss piano black baffle that hides all mounting hardware.

Key to their sophisticated sound is an advanced topology Vojtko™ crossover network. Each crossover is built on top of double-layered, super-thick, black PC boards and constructed with the highest-quality components. Internals including massive air-core coils, thick, high-purity 16-gauge copper wire, and low-distortion polypropylene capacitors ensure that every nuance of the audio signal is preserved.

"The MartinLogan Stealth line of architectural speakers impressed me. Their build and component quality is significantly high. It is obvious that much thought went into the design of these speakers, and the results are ultra high-end. MartinLogan has created a quality product that will provide a proud sense of ownership. When coupled with the BalancedForce 210 subwoofer, the sum performance was greater than any one speaker's individual achievement. I used to avoid my family room... However, thanks to the addition of the Vanquish and Axis speakers, I now find myself wanting to watch movies in the family room. I would highly recommend this product if you are considering an architectural speaker solution for your space"

A few years ago I was in the process of upgrading my media room and because of my basement room all the surrounds needed to be ceiling mounted. I know this is not necessarily ideal but such is my room so I needed a great solution to help make the best of my situation. I had some previous experience with the ML Helos 100 when I did a house remodel about 7 years ago using Sonos and TV audio as the main sources. At the time I reviewed several manufacturers of in ceiling speakers and felt the ML were the best. In fact that quest introduced me for the first time to the ML brand period. This encounter then eventually lead to Summit X speakers which was the start of my ML journey – but that is a discussion for a different time. The update to my media room was 4 years later and I wanted to stay with ML so Shawn from DaVinci Media suggest the Vanquish as my in ceiling solution. Once I got to review them on line I could see they were a very serious high end in ceiling speaker just exactly what I was looking for indeed! So I ordered 4 of them and then securely mounted them in ceiling. Actually had to make some wood brackets spanning the joists so that the speakers were mounted securely as the drop ceiling itself would of never have held them. They are crazy heavy, big and just cry out tons quality. It’s amazing all that is packed into that 13” round area yet it totally makes sense what is in there and how the individual speakers are placed within each. The speaker has a couple of switches to allow for different location placements which is really nice to help customize each speaker’s sound to its physical location. However from an installation perspective they are big and heavy yet are quite easy to mount. If you have ever worked with other speakers getting them locked in and tight is not always that easy while holding the speaker in place. The design ML has is clever and works great either installing or if you every have to remove it. In addition they have an installation bracket that really helps to hold each in place as the locks are tightened down. I also like that there is no visible ¾” or so lip showing once in place. The only thing showing is the perforated paintable disc with a very short lip. The other thing is the disc is magnetically attached unlike many others that are much harder to remove. I have removed mine several times as I like to show people what is ‘under the hood’ so to speak. Everyone is just blown away at what they see and always have questions concerning what they are looking at. Sonically they work great for surrounds and I have been real happy that I did spend the extra money for these as they have performed very well indeed. A year or so ago I decided to upgrade my media room to a 7.2.2 system. The obvious choice was to add two more Vanquish for the 2 additional ATMOS channels. Now with 6 in ceiling speakers, a Focus center channel and a pair of 13A’s speakers I have a great media room. Yes the front three channels are great but 4K movie and concert Blu-rays would not have nearly the impact without these great sounding surrounds. There is an argument to make to not spend so much money on the surround speakers as they are not nearly as important as the front three channels. I agree to a point. All I can tell you is with the Vanquish speakers as my surrounds truly makes the in home experience so much more real and are very much worth the extra cost in my opinion. These speakers can put out volumes of good sound just like the Director, Band or Singer wanted!